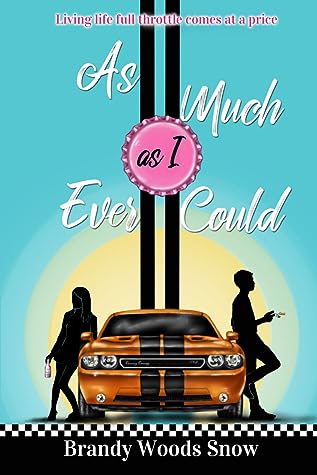 All CJ wants to do is isolate herself and make it to the trial at summer’s end, where she’ll testify against the stranger who couldn’t keep his car in its own lane.
She doesn’t expect to fall for a boy, especially not Jett Ramsey, a hotshot racing champion destined for greatness on the NASCAR circuit.

CJ’s resolve crumbles when she loses a bet that puts her squarely in Jett’s
driver’s seat. While he patiently reintroduces her to driving, they confide in each other, and CJ learns she’s not the only one silently suffering through a loss.

As their connection deepens, Jett’s focus on the track is called into question. CJ can’t be the cause of another car crash, but her heart is broken either way. Can CJ learn to put her heart in drive? Or will she throw it in reverse.

AS MUCH AS I EVER COULD is a Southern novel that reminds me of the great Sarah Dessen. You know, a lazy beach town, summer, and of course, romance. I love that CJ fights for what she wants, pushing through obstacles and whatnot. A strong female protagonist, she is.

The racing elements of the story combined with CJ’s fear of driving add a special flavor to the story.

Overall, another great novel by Brandy Woods Snow–don’t miss out and read it!