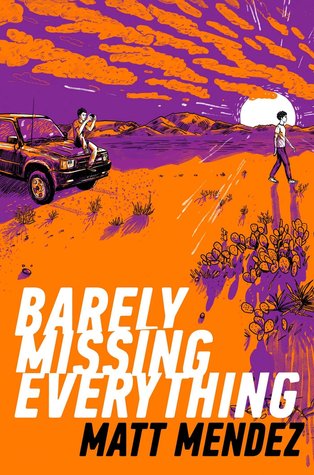 In the tradition of Jason Reynolds and Matt de la Peña, this heartbreaking, no-holds-barred debut novel told from three points of view explores how difficult it is to make it in life when you—your life, brown lives—don’t matter.

Juan has plans. He’s going to get out of El Paso, Texas, on a basketball scholarship and make something of himself—or at least find something better than his mom Fabi’s cruddy apartment, her string of loser boyfriends, and a dead dad. Basketball is going to be his ticket out, his ticket up. He just needs to make it happen.

His best friend JD has plans, too. He’s going to be a filmmaker one day, like Quinten Tarantino or Guillermo del Toro (NOT Steven Spielberg). He’s got a camera and he’s got passion—what else could he need?

Fabi doesn’t have a plan anymore. When you get pregnant at sixteen and have been stuck bartending to make ends meet for the past seventeen years, you realize plans don’t always pan out, and that there some things you just can’t plan for…

Like Juan’s run-in with the police, like a sprained ankle, and a tanking math grade that will likely ruin his chance at a scholarship. Like JD causing the implosion of his family. Like letters from a man named Mando on death row. Like finding out this man could be the father your mother said was dead.

Soon Juan and JD are embarking on a Thelma and Louise­–like road trip to visit Mando. Juan will finally meet his dad, JD has a perfect subject for his documentary, and Fabi is desperate to stop them. But, as we already know, there are some things you just can’t plan for…

The title, BARELY MISSING EVERYTHING, tells is all. It’s “barely” and “missing” and “everything,” which sounds contradictory, but after you read this book, it’ll all make sense. The story is told in a unusual way: Two teen and one adult narrators. At the beginning, I doubted this was going to work, because this is a YA novel, thus I thought adding an adult to the mix would make the novel more adult-ish. It doesn’t. Instead, this POV gives the whole book more depth, if that’s even possible.

The novel is gripping and super-engaging, but it isn’t for the faint of heart, or for people looking for a light read. This book deals with heavy stuff and, sadly, a lot of the situations depicted here are real. And the characters feel real. Even the pages feel real.

Overall, BARELY MISSING EVERYTHING is a heart-wrenching, gripping, and engaging novel dealing with hard situations. If you can stomach that, I highly recommend it.